What to Expect with WordPress 5.0?

Later in 2018, WordPress 5.0 will be launched. Here’s what you need to know about the next major update for the popular content management system.

It’s difficult to imagine the World Wide Web without WordPress. Can you believe that at some point, most websites were coded by hand? Harsh and expensive times, for sure!

Some were “lucky” enough to use software like Dreamweaver, but a lot of webmasters back then resorted to Notepad or simple, very clunky editors by today’s standards like Geocities (RIP).

Since its creation more than 15 years ago, WordPress revolutionized how we create websites. The content management system (CMS) developed by Automattic has helped millions of people successfully publish their own articles seamlessly, sell goods & services, share photos & videos, etc. All without any prior coding knowledge!

WordPress is now an integral part of the Internet. So much so that 30%+ of websites are built with the popular CMS, according to survey firm W3Techs. It even pushed us to create our own WordPress plugin for adult affiliates!

With WordPress 5.0 looming on the horizon, here’s what you need to know about the next CMS’ next major release — and how to prepare for what will undoubtedly be a game changer.

Getting Warmed-Up With WordPress 4.9.8

WordPress recently launched a new version of its platform, numbered 4.9.8. This maintenance update is meant as a precursor to what’s in store with WordPress 5.0 — which doesn’t have an official launch date yet, but we know is coming later this year.

Besides fixing 46 bugs, this maintenance update includes the first ever opportunity to test the Gutenberg block editor before its official launch in WordPress 5.0. This will replace the Tiny MCE editor which you’ve been using for a while.

If you log in to your newly updated website’s dashboard, you will be welcomed with the following screen:

Dashboard message for the “Try Gutenberg” feature of WordPress 4.9.8

You can install Gutenberg as a plugin and activate it to get familiar with how editing will work in the near future for WordPress 5.0.

Here’s a full preview of the new look & feel you can expect taken from our test environment:

As you can see, the interface is a bit bland with all available features simply laid out and readily accessible. The main difference though comes from posts’ structure, now using what WordPress calls blocks.

Blocks allow you to have even more control over the layout of your blog posts and pages… in theory (more on that later).

In the example above, we can easily change the cover image of our post (a block), choose if we want it to have a fixed background, select background opacity and even add our own custom CSS if needed.

It’s not a change everyone will agree with, especially compared to previous versions of the CMS.

Scrolling down your post or page, you’re able to highlight different blocks and modify their content on the fly.

One nitpick we had with WordPress’ Tiny MCE editor was how cumbersome it was to edit HTML, having to switch tabs between the visual editor and code. Thankfully, Gutenberg streamlines this process by allowing us to code on the same page, like so:

Here’s a sample of the many block types you’ll be able to use starting with WordPress 5.0 (or now if you’ve updated to the latest version):

The new block editor promises an effortless environment for publishers to work with. Being able to preview changes as they are made is a huge plus for WordPress content creators.

Add in some other neat features like drag & drop images and you’ll ask why this update didn’t come sooner! Everything’s not perfect though, far from it…

How to plan ahead for WordPress 5.0

Gutenberg and all that jazz are huge; some hiccups are to be expected along the way.

Since plugins will also be transformed into blocks, it’s safe to assume there will be a lot of compatibility issues popping up in the first few weeks of WordPress 5.0’s roll-out.

The most popular themes & plugins will probably adapt just fine, but other, more niched add-ons might suffer immensely.

This is why it’ll be imperative to backup your WordPress database BEFORE switching to 5.0. Just like you do each time a new major release comes around the corner… right?!

If you’re not sure how to backup your WordPress install, we recommend the following plugins that have a proven track record and will do the job for you: UpdraftPlus (Free & Paid), BackupBuddy (Paid) & VaultPress (Paid).

We’re poking fun, but at the same time it’s important to have a backup plan should things go south. Especially knowing Gutenberg will be part of WordPress 5.0’s core, meaning you’ll either deal with it, or install the Classic Editor to cast it out of existence.

One more thing you need to know: upgrading to WordPress 5.0 and your new friend (or foe!) Gutenberg will be irreversible! So before transforming your website into spaghetti, test drive 4.9.8 now to know what’s coming or just wait for the dust to settle.

Take a look at this screenshot: 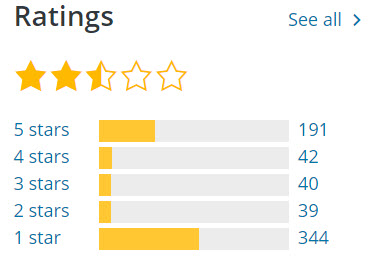 At the time of publishing, this is what users think of the yet to be released Gutenberg plugin. It’s…ugly to say the least.

Here’s some reasons why people think so poorly of the upcoming change:

The thing is, even though you might agree with some of the changes brought forward in WordPress 5.0 and more precisely Gutenberg, it feels like a trainwreck in the making.

It’s in our nature to resist change. However, you can’t help but feel the upcoming major release will shake things up just for the thrill of it. Content creators gain nothing from having to relearn a tool they’ve successfully mastered for years.

It’s mind-boggling really. There are some cool features included in Gutenberg, but it’s still a hard pill to swallow for webmasters. And that’s without taking into account all the clients that have been told to religiously upgrade WordPress ASAP to avoid security issues.

Clients who might unconsciously trigger the downfall of their online properties and see years of work crumbling down right before their eyes thanks to the new blocks structure. As an added bonus, if their websites don’t break down, it’s going to be fun having to explain how to use the new Gutenberg editor.

The real risk for WordPress is to lose the trust of millions of users around the world, which could lead to a mass exodus toward other CMS solutions like Drupal.

Give the Gutenberg demo a try

You don’t need to install WordPress 4.9.8 just to try the new editor. Frontenberg allows you to try the plugin with a limited front-end demo. Great if you don’t plan on updating or just want to play it safe.

What do you think?

WordPress 5.0 is certainly a hot topic right now. There are those who are optimistic about the change, but they’re currently outnumbered by very concerned webmasters.

On the plus side, it shows that WordPress developers are always willing to pave the way for new, albeit controversial features. Maybe it’s a case of if it ain’t broke, don’t fix it. Or maybe we just like to climb the walls whenever a significant change comes our way. Time will tell if the popular CMS alienated its user base with a move many deem unnecessary.

What’s your take on this upcoming version of WordPress? Let us know in the comments below!