Automation is upon us. In fact, the online advertising landscape has already changed. Enter the era of programmatic advertising.

Have you ever struggled to grab the attention of potential consumers with your digital ads?

You’re not alone. With so many ads being served on millions of websites all around the world, choosing where and how to display yours is no easy feat.

Imagine if you have to deal with ad buyers to cap it all off! The nightmare!

This is where programmatic advertising shines.

Are you ready to take the great leap forward?!

The early days of online advertising

The Internet as we know it today didn’t come into life before 1973 when different network methods—including ARPANET and DARPA—merged together under a common internet work protocol, effectively hiding their differences.

Internet predecessors had put into place strict rules against commercial use by for-profit organizations, which didn’t stop marketers from spamming through mailing. The Prodigy network was among the first to offer an online advertising service with non-clickable display ads in fixed spots…

In 1994, a new milestone was reached when the first ever online clickable ad was sold off to AT&T for then commercial web magazine HotWired.com. It read “Have you ever clicked your mouse right HERE? You will” in a rainbow font on a black, rectangular background. Yup, early 90s was a weird time to be alive.

Back then, HotWired had sold its banner spot for $30,000 USD, using a business model similar to print media. For its whole 3-month duration, the first ever banner ad recorded a gigantic 44% clickthrough rate (CTR). How times have changed!

Each click led to a very basic landing page (by today’s standards) where users could enjoy different activities from the comfort of their seat, like touring an art museum. Rather than being a sales pitch, the landing page offered a valuable experience to potential customers… a concept that still resonates with modern marketing today.

Following the success of AT&T, other corporations expressed interest in buying ad space. In 1995, FocaLink Media Services launched the first ad central, allowing total control over online advertising delivery. However, advertisers were still left in the dark because there was no way to assess if the ads were actually accomplishing their objectives.

Doubleclick provided a solution to this problem in 1996 with its Dynamic Advertising Reporting & Targeting (DART) product. Clients could see how many times a banner ad was seen (impressions) and clicked (CTR), allowing them to make on-the-fly changes to live marketing campaigns. Back then, advertisers had to wait until a campaign was over before they could try new ideas.

Fast forward to current times and advertisers now have complete control over their online advertising campaigns. Years of innovation and technological breakthroughs led to powerful solutions, some of which are already making waves all around the world.

What is programmatic advertising?

You’ll never have to buy directly from a sales rep ever again!  No more haggling for a spot…

Better yet, transactions are concluded while visitors are live, so the value can’t be faked.

If that sounds like music to your ears, media buying using automated software might just be the big break you’ve been looking for.

Why should I use programmatic advertising?

In a nutshell, to save lots of time and money.

Let’s look at some of the main benefits that’ll make you appreciate this more efficient way of working:

Let’s face it: manually purchasing ads has its fair share of inconveniences.

Stuff can get expensive real fast and you’ll never have the insane reach only an automated platform can provide.

Gone are the days where you were pondering costs and still debating crucial data points about your audience. Tracking is pretty in-depth and there’s no hidden costs. Also, withholding key details is almost impossible.

It might sound like humans are falling by the wayside, but it’s more an evolution than anything else. Automated processes allow us to be more efficient while doing away with the more menial tasks. And it’s not like humans won’t be needed anymore to fine-tune campaigns or fix potential problems.

If you’re confused about programmatic advertising and real-time bidding (RTB), we can’t blame you.

While at first glance it does seem like real-time bidding and programmatic advertising are one and the same, that’s really not the case here.

Real-time bidding is a form of programmatic advertising that allows media buyers to buy and sell ads on a per-impression basis.

This is huge because before previously, impressions had to be bought in bulk.

The ads are auctioned off on automated platforms, which are divided into two categories:

DSPs connect to ad exchanges such as AppNexus or DoubleClick (merged into the Google Marketing Platform in 2008).

RTB is indeed automated. It’s part of programmatic advertising, one of its possible processes.

The confusion stems from how a majority (around 90%) of programmatic advertising is RTB. But there are other ways automated advertising manifests itself, for instance:

While generally acknowledged as cheaper and more efficient, programmatic advertising isn’t without its own shortcomings.

As you are well aware by now, impressions are at the heart of online marketing.

So what happens when your ads are viewed by bots rather than humans?

Online ad budgets that go up in smoke, costing businesses as much as $23B in 2019 according to a report from CHEQ, that’s what.

Bot-driven traffic & clicks is nothing new. However, with automation comes a greater risk of being exposed to fraud. It’s such a pressing issue that web marketing agency Fang created a “programmatic waste calculator” to show the real cost of your campaigns.

Thankfully though, White Ops recently reported a decline in ad fraud for the very first time. The cybersecurity company joined forces with programmatic advertising firm MediaMath to protect everyone involved against bots and invalid traffic.

Clients have also stated that programmatic advertising isn’t as transparent as it could be. The automation pipeline often involves multiple intermediaries who all take a cut of your investment. This makes it hard to know how much of your money is left for ads once all fees are accounted for.

Here’s a great overview of the different challenges programmatic marketers face according to a survey conducted by Programmatic Pioneers Summit: 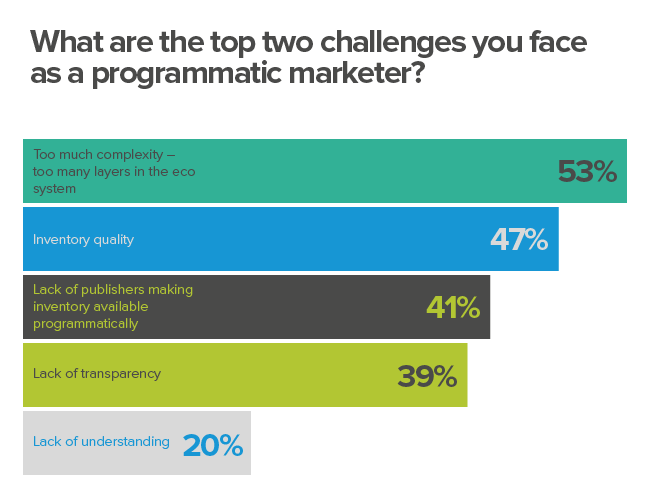 Is programmatic advertising set to shape the future of digital ad buying?

We’re pretty confident that the answer to that question is “yes.”

Automation at large is on the rise. Domino’s will start using an autonomous robot to deliver pizzas soon. Our automaton friends are now roaming in some grocery stores.

Exciting times. Or scary times, depending on how you see it.

If we have a chance to automate a process and save money doing so, you can bet we will.

According to a report by eMarketer, programmatic advertising will account for 86.3% of the digital display market by 2020. It’s not just a trend: it’s the norm. 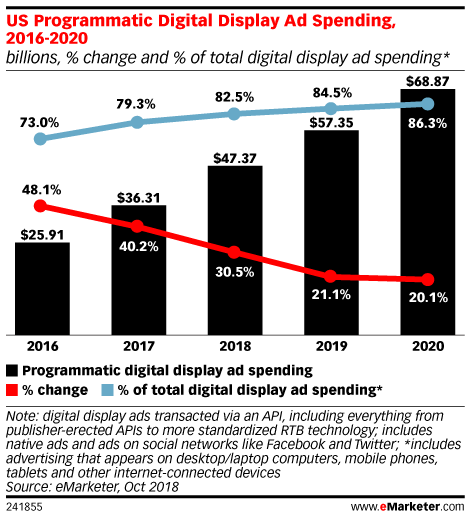 Still according to eMarketer’s detailed research, “83.6% of all digital video ad dollars in the US, or $33.55 billion, will move via automated channels.”

We are the future

Programmatic advertising is already seeing widespread adoption among online marketers. However, it also has a duty to improve.

There are at least two areas where major fixes are needed: curbing fraud as much as possible and allowing more transparency in regard to data insight so campaign performance can be properly assessed.

What do you think of automated software to buy and sell ads? Is it something you’d be inclined to use if you could? Let us know in the comments!

What is a DSP and How Does it Work? Demand-Side Platform Explained by Media Buyers

In the past, negotiating media and publishing an ad could take days, even weeks. Today, thanks to their automation and ability to connect multiple ad sources, demand-side platforms (DSP) have become one of the media buyer’s primary tools. Learn what is a DSP and how it works!

Learn to combine the power of an excellent web advertising platform with our advanced CPA network.

Here’s our detailed 2021 Traffic Junky review, followed by a step-by-step tutorial on how to start media buying successfully with Traffic Junky and Crakrevenue!