How to Get Around Ad Blockers

Advertise smarter, not nore aggressively. It used to be up to the visitor to decide, but not anymore. Here's how to get around ad-blocks!

Consider this for a second...

In a recent survey, at least 41% of 18-29 year olds have claimed to use some type of AdBlocking software on a regular basis while browsing the web.

And while younger users aged 13-17 may not be AdBlock’s primary demographic, 29% of this crowd is reported to use this technology. The older the user, the lower the usage of Adblock tends to be.

AdBlock was designed to block dreadful annoying popups and was created to give users more control, there’s no doubt about that.

But what is irrefutable is just how commonplace it is now compared to years past.

Again.. think about this for a second. The world’s most popular browsers today are being released with AdBlock technology built in. Translation? Never before have the odds been so instantly stacked against even the best do-gooders of the publishing & digital media world today.

That said, these previously optional services are being forced on more and more people and in turn could threaten livelihoods if advertising and affiliate marketing is your main source of revenue.

It used to be up to the visitor to decide, but not anymore.

The growing popularity of Adblock has led to decreased earning opportunities all-around since nearly all the mainstream ad networks have found themselves victim to various AdBlock “filter lists.“

But here’s how you can Advertise SMARTER…

Whether it’s a .JPG, .GIF, or a Flash based campaign, you can typically host any of these advertisements on your own website.

The two-step process for getting around AdBlock

In some cases, an entire URL will be filtered and Adblock won’t allow you to click it.

Fear not! Here’s the simple 2-step process for getting around this:

When you create a new file, you are creating a new inbound link. In some severe cases of a sponsor’s entire URL being blocked, one alternative option is to create a new file name in your directory (e.g., /newfile.html), and place a simple HTML meta element in the header.

Have your newfile.html redirect to one of CrakRevenue’s offers directly!Choose the offer of your choice, and then redirect to your CrakRevenue direct link code like this:

You are now on your way to making more money again.

Instead of linking to your overly filtered “Example.com/banners/ad001.gif” — you will now simply hyperlink your uniquely_named_banner.gif (without using the word banner!) and have it link to newfile.html (which, should then redirect to the affiliate link code of your choice!)

Other Solutions Webmasters Have Been Turning to…

In fact, one noteworthy AdBlock Detection campaign comes from Wired.

Wired reminds its audience that ads for them help keep the lights on, and encouraged its users to either whitelist their site or pay $1 a week for an ad-free version. 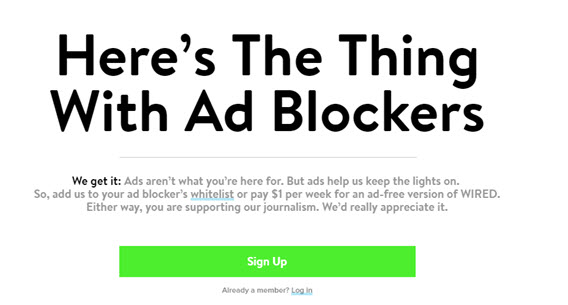 The premise is always the same; remind the user that the site is supported by ads. 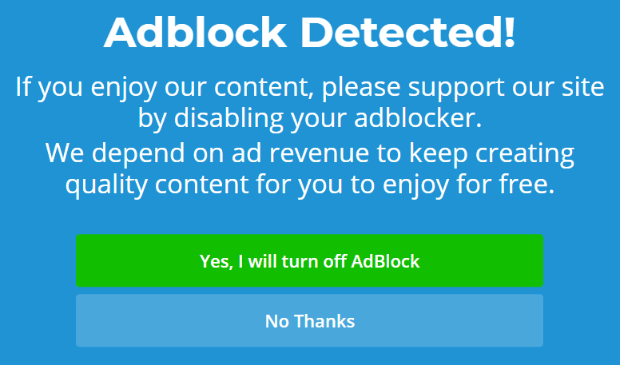 Another approach is offering an alternative version of your site.

One with ads… and one without.

But of course, for users to experience the truly “ad free one” … you might ask your visitors to pay a one-time (or even monthly) fee for greater convenience

Putting it all together

With usage at an all time high and more downloads than ever before, it’s clear AdBlock’s a double-edged sword that isn’t going anywhere and webmasters must continue to adapt if they don’t want to leave money on the table.

We explored the super simple two-step workaround you could be using to give your advertisements more power in being seen as well as an overview on some of the common Anti-detection campaigns of today.

What are your thoughts on this technology?

Have you viewed AdBlock as an obstacle or do you see it as one moving forward?  Share your thoughts in the comments!

Jump on this opportunity to learn from the best and make new connections with interNEXT, the industry’s longest-running tech conference and landmark event.

Describing 2020 as a special year would be an understatement, just like us saying Thank You!

GAME ON, Our Mad March Contest is Here!

Enter our Mad March Contest and reach a payout of 100$ for a chance to win an exclusive basketball-themed CrakRevenue reward!

Jump on this opportunity to learn from the best and make new connections with interNEXT, the industry’s longest-running tech conference and landmark event.

Have you ever wondered how people are making money online? Additional income is always welcome indeed, but what if an online side hustle could potentially become a long-term thriving business? Search no more, for CPA Marketing is the best way to earn extra bucks in the comfort of your home.